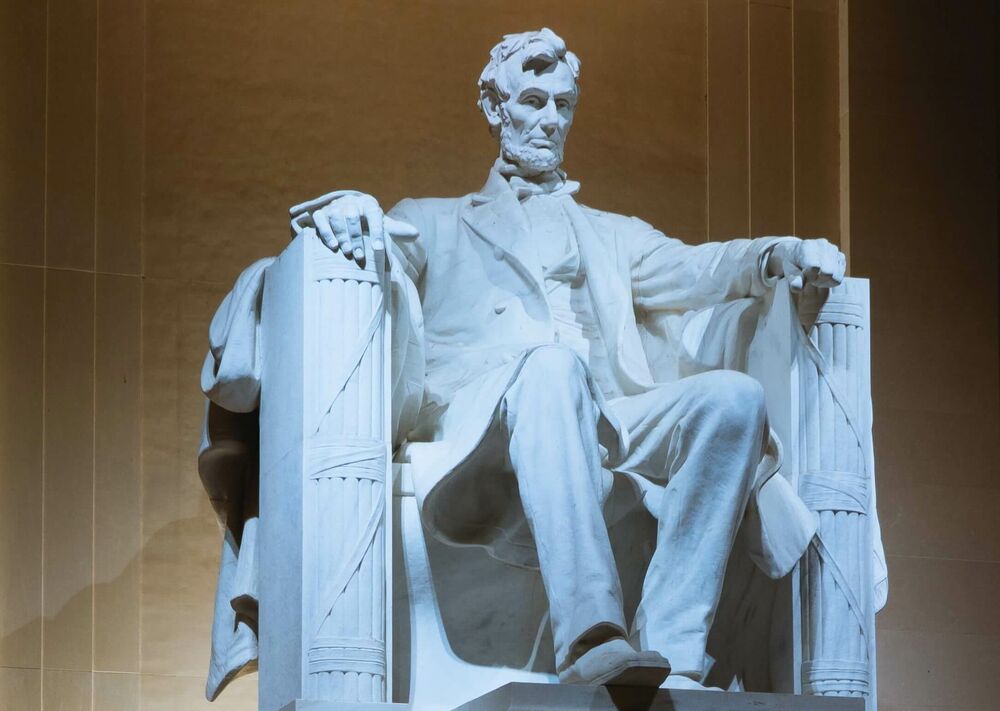 As you probably know, Lincoln was a lawyer by profession and really a country lawyer at that. He travelled a circuit in his home state of Illinois. He was widely known for his homespun humor and good stories.During Lincoln’s presidency, however, it was difficult to find humor in much of anything as the United States plunged into Civil War. But Lincoln’s storytelling abilities were a different matter altogether. They would usher him into greatness, define his presidency, and secure his place in American history as the Great Preserver of the Union.

As president, Lincoln was reminded of the power of story on a daily basis. Two books sat on his desk at all times: The Bible and the complete works of William Shakespeare.  Nearly everything Lincoln wrote and spoke about demonstrated his exceptional command of storytelling. That command included a deep-seated understanding of three key elements found in great storytelling: audience, attention, and action. All three elements are evident in Lincoln’s 272-word masterpiece, The Gettysburg Address, which he delivered today, on November 19th, 1863. 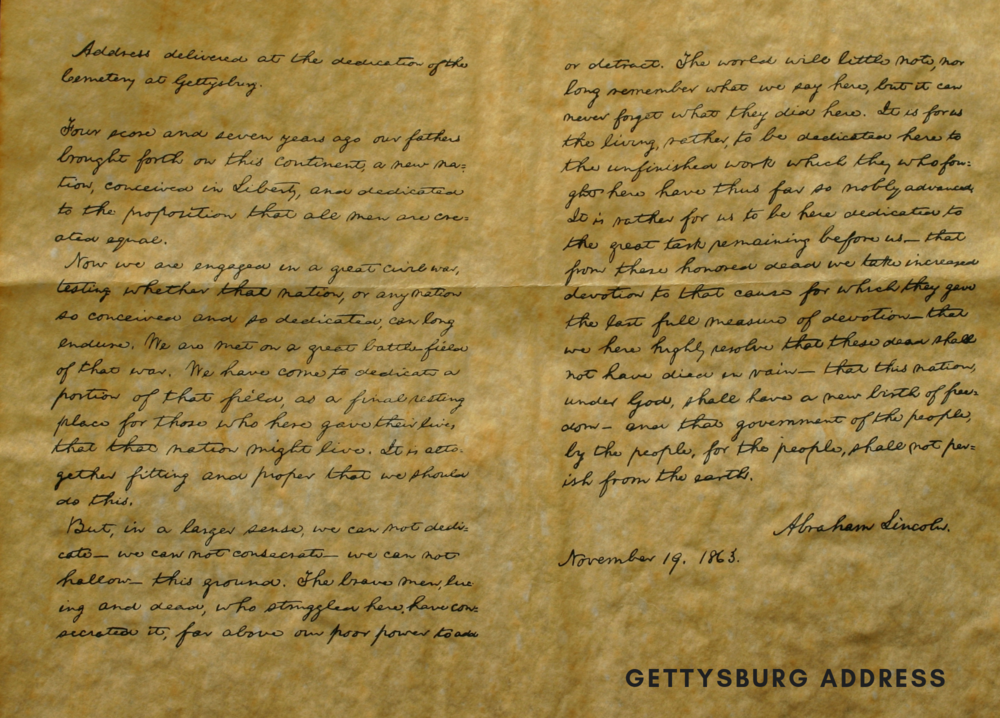 Fourscore and seven years ago our fathers brought forth, on this continent, a new nation, conceived in liberty, and dedicated to the proposition that all men are created equal.  Now we are engaged in a great civil war, testing whether that nation, or any nation so conceived, and so dedicated, can long endure.  We are met on a great battlefield of that war. We have come to dedicate a portion of that field, as a final resting-place for those who here gave their lives, that that nation might live. It is altogether fitting and proper that we should do this. But, in a larger sense, we cannot dedicate, we cannot consecrate—we cannot hallow—this ground. The brave men, living and dead, who struggled here, have consecrated it far above our poor power to add or detract.

The world will little note, nor long remember what we say here, but it can never forget what they did here. It is for us the living, rather, to be dedicated here to the unfinished work which they who fought here have thus far so nobly advanced.It is rather for us to be here dedicated to the great task remaining before us—that from these honored dead we take increased devotion to that cause for which they here gave the last full measure of devotion—that we here highly resolve that these dead shall not have died in vain—that this nation, under God, shall have a new birth of freedom, and that government of the people, by the people, for the people, shall not perish from the earth.

There’s so much to glean from this historic speech just around the three elements of audience, attention, and action.  I’ll talk about each one briefly.

Successfully leading with storytelling begins before any words are spoken or any thoughts are put down on paper.  It begins with the following hard, humble truth that what you’re trying to get across isn’t about you – It’s about your audience. Lincoln understood this,  perhaps better than any other U.S. president. His capacity for empathy in leadership remains unrivalled.

The first point that most people make about the Gettysburg Address is its brevity. It’s short.  It’s about the length of a long email.  But what jumps out at me isn’t its brevity but its humility. Lincoln never uses the pronoun “I” in his address.  He uses the third person throughout, we and our.  Lincoln doesn’t call for unity, he uses the language of unity. Lincoln was also keenly aware that he had more than one audience he wanted to reach.

There was the audience in attendance that day – around 15,000 people, who had gathered to dedicate a national cemetery. There were newspapers and their readers.  Lincoln knew a short speech was more likely to be read and shared.  There were those from the North but also those from the South who Lincoln was speaking to. Lincoln’s task was not unlike a father attempting to reconcile two estranged sons.  History itself was an audience that day as well.  Lincoln was speaking to generations to come – to those not yet born.

By putting your audience first, you’re far more likely to grab their attention. As someone once said, people don’t listen to what you say, they listen for what’s in it for them.  Lincoln was also able to grab and keep attention by talking with his audience, not at them.  His words were the very definition of eloquence.  He used those words we use every day to great effect. There is no jargon.  No clichés. Nothing alienates an audience faster than unfamiliar words and tired phrases. We don’t find either in Lincoln’s speech.Okay, but what about the use of the word “score?”

That’s not a word most of us know.So, why does Lincoln use it? “Score” represents 20 years.  It’s a measurement of time that Lincoln would have likely learned from the Bible.  In referring to four score and seven years ago, Lincoln is looking back 87 years to the signing of the U.S. Declaration of Independence.  But he’s doing so, not only as a record of time but in a way that also evokes solemnity and reverence. The use of score elevates his purpose, his discourse, and the stakes involved. It also signals the unexpected which causes people to lean in and want to learn more.

Lincoln upholds that cardinal rule of storytelling: pay attention to your audience if you want your audience to pay attention to you. He raises the stakes, beginning with the phrase “in a larger sense…” and uses the power of purpose to grab and keep their attention.  Lincoln also deftly keeps everyone in attendance there in the moment. Mindfulness is one of the acolytes of attention.  As speechwriting expert Dr. Nick Morgan has noted, the word “here” is prominent. “Here” occurs 9 times – second only to “we” which occurs 11 times.

Lincoln upholds that cardinal rule of storytelling: pay attention to your audience if you want your audience to pay attention to you. He raises the stakes, beginning with the phrase “in a larger sense…” and uses the power of purpose to grab and keep their attention.  Lincoln also deftly keeps everyone in attendance there in the moment. Mindfulness is one of the acolytes of attention.  As speechwriting expert Dr. Nick Morgan has noted, the word “here” is prominent. “Here” occurs 9 times – second only to “we” which occurs 11 times.

Raising the stakes then resolves into the action Lincoln is requesting from those attending and from a nation at war with itself.  He moves from dedicating the cemetery to calling on anyone listening to him at the ceremony or reading what he said to rededicate themselves to the ideals of self-government and freedom.

All three elements are evident in The Gettysburg Address as Lincoln transforms an already-meaningful milestone into a profoundly, meaningful touchstone in American history.  It’s the very creation of meaning…of making things matter…that makes really good storytelling so powerful.  Inspiring people to take the action you want makes storytelling effective.  Learning, storytelling, and leadership are inseparable and indispensable.